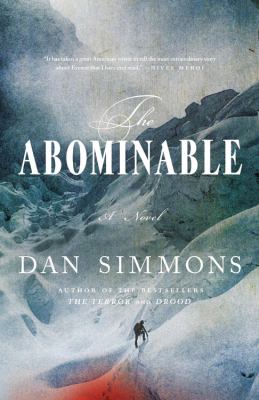 This week’s book is Dan Simmons’ The Abominable. The novel, inspired by a story told to the author during his research for 2007’s The Terror, takes place in 1924 as intrepid explorers have begun the race to scale Mt. Everest has been stymied by the mysterious disappearance of two climbers. However, in that same year three explorers set out to explore Everest. While the dangers of the climb itself are known the group of climbers finds themselves pursued and harried by something or someone.

Simmons’ earlier thriller The Terror, following an Arctic exploration, was a significant accomplishment that blended impeccable historic research with the bloody horror of the unknown. I have known doubt that Simmons’ newest will fall into a similar vein as the author quickly establishes his well researched facts about mountain climbing in the 1920s. While The Terror was a novel not without its problems the stark imagery of the landscape combined with the atmosphere of fear made for a compelling and chilling combination. All indications are that The Abominable is set to capture those same elements.

Here is what the publisher Little, Brown and Company has to say:

A thrilling tale of supernatural adventure, set on the snowy peaks of Mount Everest from the bestselling author of The Terror.

It’s 1926, and the desire to summit the world’s highest mountain has reached a fever-pitch among adventurers. Three young friends, eager to take their shot at the top, accept funding from a grieving mother whose son fell to his death on Mt. Everest two years earlier. But she refuses to believe he’s dead, and wants them to bring him back alive.

As they set off toward Everest, the men encounter other hikers who are seeking the boy’s body for their own mysterious reasons. What valuable item could he have been carrying? What is the truth behind the many disappearances on the mountain? As they journey to the top of the world, the three friends face abominable choices, actions–and possibly creatures. A bone-chilling, pulse-pounding story of supernatural suspense, THE ABOMINABLE is Dan Simmons at his best.

You can read the first four chapters of The Abominable here. The novel can be placed on hold by visiting the library’s catalog page here.

This month’s 2nd Saturday Bookclub Title is “The Lowland” by Jhumpa Lahiri. Come join us on December 13 from 11 am to […]

You may or may not have heard that author Terry Pratchett died this past Thursday at the age of 66.  A wonderfully […]

With Thanksgiving rapidly approaching you may have already begun your food prep and grocery store runs.  However, if you’re still looking for […]