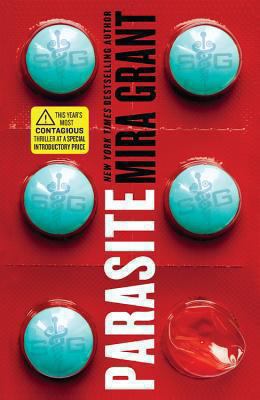 Parasite , is a science-fiction/horror novel by Mira Grant (the Newsflesh trilogy).

SymboGen has pioneered a genetically engineered tapeworm that bolsters the human immune system. Nearly everyone has one. When Sally Mitchell’s gets into a fatal accident (that isn’t an typo, she is brain dead) her SymboGen implant saves her life. Upon waking Sally has no memories. None at all, everything from her family to basic human social interaction is all gone. The novel picks up six years after Sally’s accident and the now six-year-old Sally has struggled heard to relearn what it means to be human and forge new memories and has become what is essentially an entirely new person. Things become increasingly complicated as a rash of people with a “sleeping sickness” begin to pop up all across the country and some even seem particularly interested in Sally herself.

Parasite is a novel about science gone wrong. It follows in the traditions like Stephen King’s The Stand where the human created Captain Trips nearly eradicates humanity or Michael Crichton’s Jurassic Park where human tampering with dinosaurs’ genetic code has disastrous results. In many ways Parasite does for tapeworms what Jurassic Park did for velociraptors.

Who Should Read it?

Fans of science fiction and horror who aren’t overtly disturbed by the idea of parasites. Parasite isn’t overly gory though it does contain some violence.

Ok, parasites do really gross me out. Any other suggestions?

While not particularly scary Ted Kosmatka’s The Games is about genetically modified/created monsters battling it out in an arena; needless to say things don’t go quite as planned. Island 731 by Jeremy Robinson is a horror/science thriller about an expedition trapped on an island formerly used by Japans WWII human-experimentation division Unit 731. Or if action rather than horror is more your thing you might check out Jonathan Maberry’s Joe Ledger series.

It’s the end of the year, which means there are tons and tons of “Best Book” list variations coming out for 2014. […]

This week’s Staff Pick is Eleanor Oliphant is Completely Fine by Gail Honeyman. When we first meet Eleanor, she is a reclusive […]

In celebration of this year’s Summer Reading program theme, Oceans of Possibilities, the library has put together a special display for our […]