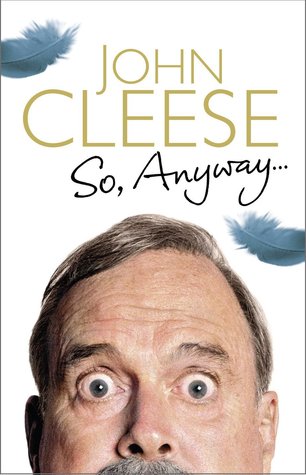 So, Anyway is a 2014 autobiography written by the legendary English comedic actor John Cleese. Monty Python fans will know him as the tall, boisterous performer who co-wrote such classic sketches as “the Dead Parrot Sketch,” “Cheese Shop,” and “the Ministry of Silly Walks.” While Cleese’s long career has shown his natural talent for comedic writing (and while the book certainly has moments of quality humor), So, Anyway is primarily a serious look at the author’s early childhood and career before the advent of Monty Python. Details of these memories are lovingly and scornfully recounted, as Cleese traces his development from a mild-mannered youth to an eccentric performer and brilliant comedic writer. Although Monty Python fans are sure to get the most out of this read, the many interesting observations and lucid writing of So, Anyway make it recommendable to any reader.

“Twisting and turning through surprising stories and hilarious digressions—with some brief pauses along the way that comprise a fascinating primer on what’s funny and why—this story of a young man’s journey to the pinnacle of comedy is a masterly performance by a master performer.” -From Amazon.com

May is Asian American and Pacific Islander Heritage Month! We’ve put together a reading list of notable fiction and nonfiction books that […]

It’s the end of National Reading Month… but don’t stop reading!  Even if you don’t know what to read, come try a […]

The incomparable Maya Angelou is this week’s Poet of the Week (in honor of National Poetry Month).  She’s been a staff […]