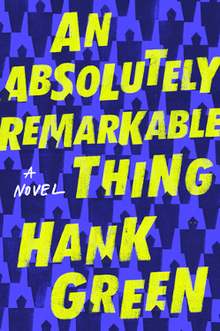 This week’s staff pick is An Absolutely Remarkable Thing, the debut novel by Hank Green. As a famous YouTube personality (known for the Crash Course series with his brother John), Green is now trying his hand at fiction. Remarkable Thing has already been receiving rave reviews and is highly recommended!

“The Carls just appeared. Coming home from work at three a.m., twenty-three-year-old April May stumbles across a giant sculpture. Delighted by its appearance and craftsmanship–like a ten-foot-tall Transformer wearing a suit of samurai armor–April and her friend Andy make a video with it, which Andy uploads to YouTube. The next day April wakes up to a viral video and a new life. News quickly spreads that there are Carls in dozens of cities around the world–everywhere from Beijing to Buenos Aires–and April, as their first documentarian, finds herself at the center of an intense international media spotlight.

Now April has to deal with the pressure on her relationships, her identity, and her safety that this new position brings, all while being on the front lines of the quest to find out not just what the Carls are, but what they want from us.” -From Goodreads.com

Did you know that October is National Reading Group Month? Reading groups and book clubs are an excellent way to bring people […]

Author Manny Luftglass will discuss his book series, ‘Gone Fishin,” disclosing some of the best fishing spots in the area as well […]

If you need help keeping your New Year’s Resolutions long after the celebrations have stopped, check out one of these eBooks or […]