Today marks the release of David Wong’s This Book is Full of Spiders, Seriously Dude Don’t Touch It to celebrate watch the totally awesome and amazing book trailer then check out my mini-review: 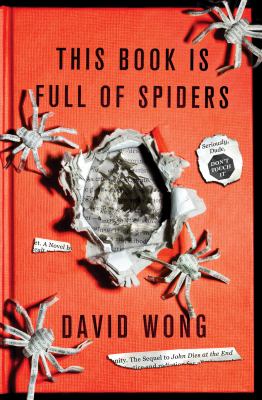 This Book is Full of Spiders, Seriously Dude Don’t Touch It

I discovered David Wong’s (aka Cracked.com’s Jason Pargin) first novel, John Dies at the End while it was still available for free via the author’s website. It was soon picked up by small horror publisher Permuted Press for publication in paperback which I immediately scooped up for the library. Two years later John Dies at the End was picked up by St. Martin’s for publication in hardcover (which the library also now owns). In the midst of all this horror luminary Don Coscarelli (writer/director of Phantasm, The Beastmaster, and Bubba Ho-Tep) adapted and directed John Dies at the End for the big screen. While the film has yet to hit theaters yet (it was on the festival circuit this past summer but looks to debut in January 2013) Wong’s first novel was something a sleeper hit (if mostly among horror fans) and it should come as no small surprise that Wong has penned a sequel novel This Book if Full of Spiders, Seriously Dude Don’t Touch It that releases today.

Much like Wong’s first novel This Book is Full of Spiders is full of…well spiders but also of the author’s trademark brand of irreverent humor and over-the-top bizarre nightmare imagery. At one point in the novel John (it isn’t really a spoiler that he survived the first novel, is it?) is assaulted by a giant spider, again not a big surprise, but said spider is composed entirely out of turkeys. Of course, like in John Dies at the End, much of novel is narrated by the fictional David Wong (who is also a character in the book). Wong, is perhaps only a tiny bit more reliable than his friend John in terms of what he says and does but that isn’t saying much.

The humor in This Book is Full of Spiders, Seriously Dude Don’t Touch It definitely falls into the less sophisticated category of college-level humor and readers should understand that this is a book that looks to mimic the gross-out over-the-top cult horror typified by the low-budget films of of the 70s and 80s. This is by and large a book designed for folks who love cult horror movies and as such it succeeds on every level. If you don’t have a soft spot in your heart for the films of Sam Raimi, if you’ve never actively wondered who would win a fight between Freddy and Jason, if you don’t cringe a little at the sight of puzzle boxes, or if you actually liked the Will Smith adaptation of I Am Legend then this probably isn’t the book for you. Everyone else? Enjoy!