What calls to the children from within the dark shadows of the shack called Neverland?

New York Times bestselling and award-winning author Douglas Clegg blends dark suspense and gothic horror in Neverland, a novel of deadly secrets and innocence corrupted. What lurks within the shack? What kinds of dangerous — and deadly — games do the children play there?

For years, the Jackson family vacationed at their matriarch’s old Victorian house on Gull Island, a place of superstition and legend off the southern coast of the U.S. One particular summer, young Beau follows his cousin Sumter into a shack hidden among the brambles and windswept trees near bluffs overlooking the sea.

And within Neverland, the mysteries and terror grow…

For fans of Dean Koontz, Stephen King, and Bentley Little. 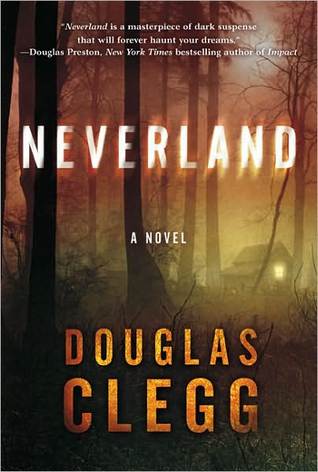 Under the oppressive heat of a Georgian summer the children of the Jackson family follow their cousin Sumter into worshipping the dark being he calls Lucy. Small sacrifices and strange glimpses of the otherworldly steadily escalate into something far more sinister. A terrifying read Douglas Clegg’s Neverland takes the wonder of a child’s imagination and twists into something dark and terrible.

“Neverland is a masterpiece of dark suspense that will forever haunt your dreams.” – Douglas Preston, New York Times Bestselling Author of Impact and (with Lincoln Child) of Relic and Gideon’s Corpse.

“Douglas Clegg’s Neverland is an unforgettable novel that combines creeping horror and psychological suspense. It starts like a bullet and never slows down.” – David Morrell, New York Times Bestselling Author of Murder as a Fine Art.

“This is a powerful and thrilling tale, Douglas Clegg’s best novel yet. The novel builds in whispers and ends in a scream. You will never forget Neverland.” – F. Paul Wilson, New York Times Bestselling Author of Nightworld and the Repairman Jack series.