Skip to content
Home » Books » Staff Pick of the Week – Women in Science: 50 Fearless Pioneers who Changed the World by Rachel Ignotofksy 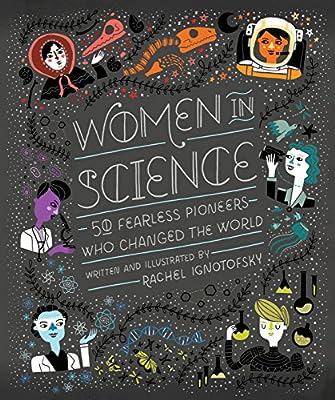 On this day in 1862, renowned American geologist Florence Bascom was born. She was the first woman to earn a PhD  from Johns Hopkins University in 1893, and she was the second woman in the United States to earn a PhD in geology. She also went on to be the first woman named assistant geologist to the U.S. geological survey (one of the most important positions in the field). As if this weren’t impressive enough, over her career she wrote 40 scientific articles that made her world renowned in her field. To honor her life and achievements, this week’s Staff Pick is Women in Science: 50 Fearless Pioneers Who Changed the World by Rachel Ignotofsky.

“A charmingly illustrated and educational book, New York Times best seller Women in Science highlights the contributions of fifty notable women to the fields of science, technology, engineering, and mathematics (STEM) from the ancient to the modern world. Full of striking, singular art, this fascinating collection also contains infographics about relevant topics such as lab equipment, rates of women currently working in STEM fields, and an illustrated scientific glossary. The trailblazing women profiled include well-known figures like primatologist Jane Goodall, as well as lesser-known pioneers such as Katherine Johnson, the African-American physicist and mathematician who calculated the trajectory of the 1969 Apollo 11 mission to the moon.”