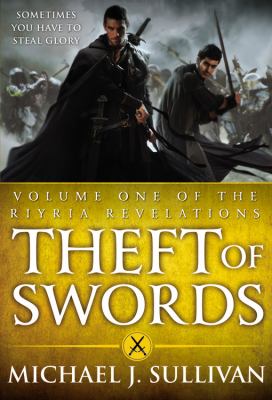 They’re not thieves. They’re independent contractors. Sure their methods might not always be legal but given the proper notice the brawny fighter Hadrian and the dexterous thief Royce can get any job done…for a price. Collecting the first two novels by author Michael J. Sullivan, The Crown Conspiracy and Avempartha, Theft of Swords is from a bold new voice in fantasy.

Drawing comparisons to the timeless work of Fritz Leiber (the Lankhmar novels) Sullivan’s thieves are vibrant characters that are a joy to read. Each of the novels here are relatively self-contained but each unveils new depths to the world that Sullivan has created. In The Crown Conspiracy Royce and Hardrian are offered a staggering sum of money to retrieve a stolen sword an offer that sounds too good to be true (hint: it is). What ensues is a tale of ancient mages, treacherous plots, and high adventure.

In Avempartha a young farm girl hires Royce and Hadrian to save both her father and her village. Of course, there is a nigh invulnerable beast that is terrorizing the village and a magic sword that most be stolen in order to stop it. Said sword is locked inside the elven tower, the titular Avempartha, and it’s up to Royce and Hadrian to get it. Things get more complicated as Royce and Hadrian are drawn deeper into the machinations of various parties.

The Theft of Swords will be followed next month with Rise of Empire and the series will conclude in January with Heir of Novron. For a sample from Theft of Swords visit the Orbit books page. Theft of Swords, the first novel of the Riyria Revelations, marks the beginning of one of the most entertaining and original fantasy series I’ve read in years.